Art of Asking by Amanda Palmer

I recommend this inspiring book written by this extraordinary artist! 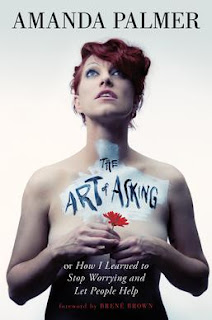 A farmer is sitting on his porch in a chair, hanging out.
A friend walks up to the porch to say hello, and hears an awful yelping, squealing sound coming from inside the house.
"What's that terrifyin' sound?" asks the friend.
"It's my dog," said the farmer. "He's sittin' on a nail."
"Why doesn't he just sit up and get off it? asks the friend.
"Doesn't hurt enough yet."


The art of asking can be learned, studied, perfected. The masters of asking, like the masters of painting and music, know that the field of asking is fundamentally improvisational. It thrives not in the creation of rules and etiquette but in the smashing of that etiquette.
Which is to say: there are no rules.
Or, rather, there are plenty of rules, but they ask, on bended knees, to be broken.